Many people think of missions as only happening in a rural or jungle setting, going to people who have never before heard the gospel. Our mission field is urban and a modern country. We are in Leiden, The Netherlands, telling children and some of their parents the gospel for the first time.

We have Dutch and immigrant children coming to our kids club, called Fundag. One boy from a Muslim background loves the kids club. He has brought his brother and sister to it as well. For our Easter outreach, he gave out 30 invitations so that more kids could come, even though he was teased by his cousins for this. (He did invite one cousin who came from Belgium.)

On Easter weekend we had a special kids club with an egg hunt and bounce castle. It was a great draw for kids. We had 30 kids who came not only for those things; they were able to hear the gospel, and for the majority of the children, it was the first time they have heard the story.

Thank you, BGMC, for making this day possible. Your money paid for eggs, snacks, prizes, the bounce castle, and advertisement. Attached are some pictures of that event and the flyer we passed out. Thank you for making a difference in the lives of these children in Leiden, The Netherlands!

Anita James
Missionary to The Netherlands 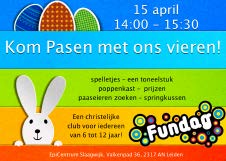 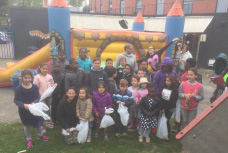