Ernesto awoke in his tiny shack and rubbed his eyes. In the dim light of dawn he could see his seven brothers and sisters sleeping on the floor. Quietly he tiptoed around them toward a curtain that served as a door.

Stepping outside, he shaded his eyes against the rising sun. Many other shacks just like his—made from scrap wood and rusty pieces of sheet metal—lined a muddy river. In Honduras these places are called “Los Bordos,” which means “borders,” or the edges of the river.

Honduras is the second largest country in Central America and the second poorest country in all of the Western Hemisphere. There are many villages like Ernesto’s in Honduras, all called “Los Bordos.”

Seeing his mother washing clothes in the river, Ernesto approached her, stepping carefully through piles of garbage, trying not to cut his feet. He didn’t own a pair of shoes. No one in Los Bordos owned any shoes. He knelt down next to his mother and cupped his hands to take a drink of the dirty water. Farther up the river, another mother bathed a sick baby. Nearby, two girls tried to comb through each others’ hair with their fingers. Next to them, their younger sister tied knots in a scrap of fabric to make a doll. No one in Los Bordos owned any hair brushes or toys.

Even worse than the lack of shoes, brushes, and toys was the lack of education. Ernesto knew that if he could just go to school, he could have hope for a better life when he grew up. But there was no chance for that. No one in Los Bordos could go to school because they didn’t have the money. In Honduras, each child is expected to bring his own pencils, notebooks, rulers, scissors, and other supplies before he can attend school. They also have to have a pair of shoes. Ernesto’s family had no money for supplies like those.

But then one day, something changed. A man named Ken Harrell came to Ernesto’s village. Ken said he was a missionary and had started something called the Children’s Gift Ministry to share the love of Jesus with the people of the village. Everyone gathered around him to listen to this “Good News.” Ernesto was especially curious to hear about a God who loved him so much that He sent His Son.

Then Ken said there was a special event at the Assembly of God church in the city, and that Ernesto and the other children could go. Some leaders passed out bracelets, and Ernesto put his on. He couldn’t read the words on the bracelet, so Ken told him it said, “Con Jesús Inicio Mis Clases” (Starting My Classes with Jesus). Ken said, “This bracelet is your ticket to get in.”

Ernesto and the other kids of his village got onto bright yellow buses. As the bus drove down the bumpy dirt road, the leaders taught them fun songs to sing. They sang all the way, laughing each time the bus hit a big bump and tossed the kids into the air.

At the church, the kids played games and watched puppets and clowns. They heard more about Jesus and how He loves the children so much. Then the kids were fed lunch. It felt so good to have a full belly!

After lunch was an even bigger surprise. The leaders brought out boxes and boxes filled with brightly colored backpacks. When one leader handed a backpack to Ernesto, Ernesto looked inside and gasped. It was full of school supplies and more, including a hair brush, a toothbrush, even a toy and a pair of shoes!

When school began that year, Ernesto put his new shoes on, threw his backpack of supplies over his shoulders, and got on a bus. As the bus rolled and bumped down the road, Ernesto knew for certain that God really does love him. Adults and kids in the U.S. cared enough to pay his way, and that showed God’s love to him. I get to go to school! he thought with a smile on his face. A big thank you goes to BGMC for its help with the expenses of this event and the supplies!

Information for this story comes from missionary Ken Harrell, founder of the Children’s Gift Ministry, and is used with permission of Assemblies of God World Missions. 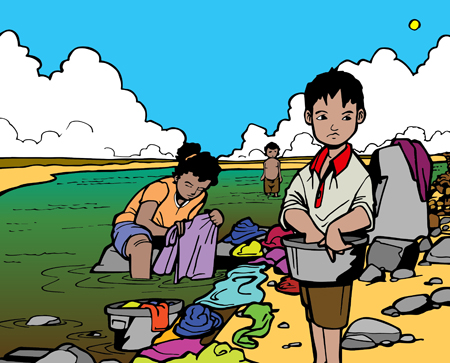 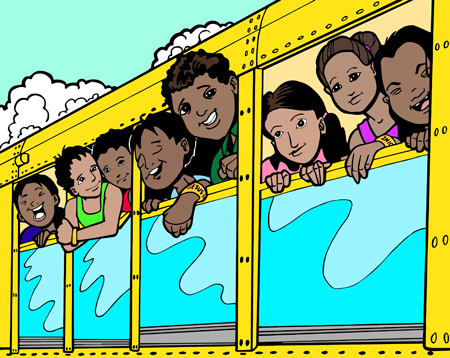 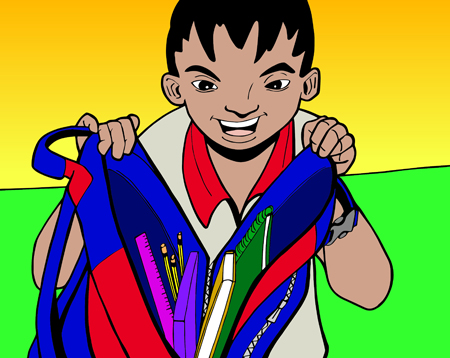 Honduras: I Get to Go to School Coloring Pages