Randy and Renee Carlson, missionaries to Tonga, started out their missionary career in the country of Palau. Palau is in the same region as Tonga, part of the thousands of islands that are found in the South Pacific. Their first year was filled with many trials, robberies, and tropical diseases. The enemy was always fighting against them, trying to stop them from spreading the love of God.

But the Lord opened doors for them to travel from village to village, reaching children with the gospel message. They built a traveling trailer, and whenever they pulled their traveling trailer into a village, children would come running up to see the puppets and hear about God’s love.

About halfway through their first year as missionaries, they returned to the U.S. for a short vacation. When the vacation was over, Randy returned to Palau first, leaving Renee with their two girls, Cherie and Charity, who were 6 and 4 years old.

When it came time for Renee and the girls to also return to Palau, Renee took the girls to the airport and got on the plane. But a message came from the captain saying that something was wrong with the plane. They would have to wait until repairs were made.

As the hours passed, Renee began to worry. She was supposed to make a connecting flight with another plane, and there would be no time to spare. She prayed that she would not miss the next plane. There was only one flight a week into the country of Palau; if she missed the plane, she and the girls could be stranded.

Finally the plane took off. The flight went well, and they landed in the next city. But there was no time to spare. Renee and the girls had to run as fast as they could so they would not miss the next flight.

To Renee’s horror, when they reached the gate, there were no people waiting. Theyhad all been taken onto the plane, and the plane was just about to take off. Renee ran to the desk and said to the man, “I was supposed to be on that flight!” The man said to her, “Sorry, lady, but the plane is getting ready to go down the runway.” Renee pleaded with him. “It can’t take off yet! I have to go on that flight.”

The man became irritated. “You’ll just have to spend the night in a hotel and go another time.” Renee was so distressed that she began to cry. “Sir, you don’t understand. I have to go on that flight. There is only one flight a week into Palau.” But the man only said, “Sorry, lady.”

At that moment, two men dressed in suits appeared on each side of Renee. They had no luggage and no tickets. They said to the man, “This woman and her children will go on that flight.” The man looked at them and said, “Who are you anyway, and what do you care about this woman?” They said, “We care about human beings, and this woman will go on that flight!” They spoke with great power and authority. Right then, the man radioed the plane. To Renee’s surprise, the plane came back to the gate and waited for her luggage to be brought on board. The door opened to allow Renee and her girls to get on.

When Renee turned to thank the men, they were gone! She asked Cherie, “Did you see where those men went so I can thank them?” Cherie said, “Mommy, they just disappeared!” Renee looked down the long hallway in the airport, but she could see no one. She knew right then that they were angels and that God had brought them to help her. As Renee thought about God’s goodness, she also thought about all the trials and difficulties that were yet ahead. But she would never forget that His angels truly are all around, watching over them. Praise His name!

Information for this story was provided by missionaries Randy & Renee Carlson and is used by permission from Assemblies of God World Missions. 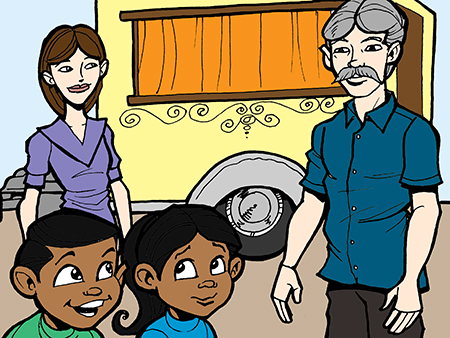 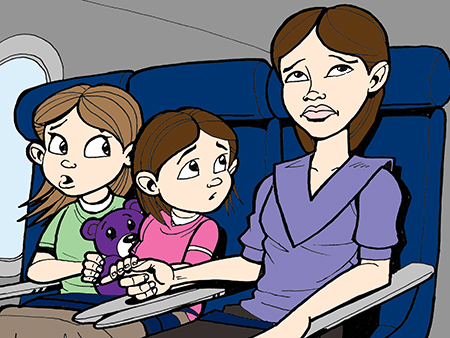 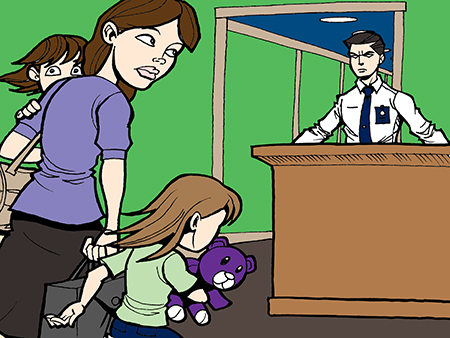