Who doesn't like throwing a pie in someone else's face?

With this fundraiser you have a lot of options:

Option 1: Set an amount for each of your kids to work towards. Any kid who reaches that goal gets to put a whip cream pie in their KidMin leader's face, whether that leader is a RR Commander, NGM leader, Sunday School teacher, Children's Church volunteer, etc.

Option 3: Boys versus Girls. Elect one leader to represent the boys and one to represent the girls. Whichever group brings the most money gets to pie the other group's leader. You can either have the winning leader pie the other group's leader, or you can make a bunch of mini whip cream pies and let each of the kids on the winning team pie that other leader.

Option 4: You can make this a church-wide event and set one high goal. If the church reaches the goal, then the pastoral team gets pied up on stage in front of everyone.

Option 5: Make it your own. Customize any of these ideas to fit your church! 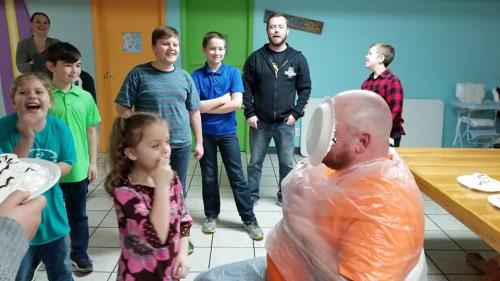